How to write when you’re not inspired 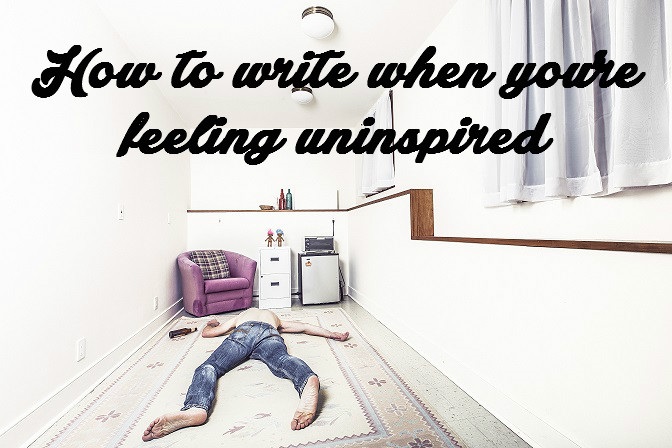 Catching up with a couple of friends, I told them I was thinking of starting a writing blog. Both told me that they too had been trying to blog about their work.

“I can do it when I’m inspired,” said one. “But if I sit down to do it, nothing comes.” The other friend nodded. “Yeah, it was alright for a while but I’ve run out of ideas. Thinking of giving up.”

I felt their pain. Who hasn’t been there? Sometimes it’s as if the harder you try to write, the harder it becomes.

Not only that, but if we rely on inspiration alone we’re told we’re not proper writers. “Inspiration is for amateurs,” the saying goes. It’s drummed into us, and has perhaps become a bit if cliché.

Real writers, on the other hand, show up every day and write, no matter what, no how many or how few words they produce, and no matter how grim and painful it may be. “Of course I write every day, what do you think I am, some kind of hobbyist?” Hilary Mantel admitted to thinking when asked whether she writes every day or waits for inspiration to strike.

But here’s the thing. Writing – cold, hard writing from scratch, sat at a desk, staring at a screen, coffee close by – will be hard if that’s how you start. That sat at a desk part – that’s not writing. That’s re-writing, drafting, editing, re-ordering, deleting (and deleting and deleting…) and it comes later. Most writing – the crazy, messy, uncontrollable, unpredictable and scary part of it – happens away from a desk. It happens when you’re:

or virtually anywhere but sat at a desk.

Real writers do write every day, but by the time they get to their desk a lot of the work is already done. By the time you sit – or stand, as I do – at your desk, you should have a tonne of ideas and scribbles – in notebooks, on sticky notes and scraps of paper, or tape-recorded, ready to transcribe. You might have taken photographs, cut out pictures from magazines, or assembled a Pinterest inspiration board.

Going straight to a computer keyboard and staring at a screen might work sometimes. It might kick-start something. But it’s not the only way to write, and not one I would recommend.

Want to write? Don’t. Go for a walk, clean your house, bake a cake, watch a film… Ideas will come, and you’ll need to do what it takes to capture them. Like butterflies, they’re elusive and ephemeral. But they’re there.

Writing can be painful. But it needn’t always be, and certainly not enough for you to give up.

And now I’d love to hear what you think. What does being inspired mean to you? Is it something you try to cultivate, or do you prefer to let it come to you? Feel free to leave a comment below.