1
SHARES
ShareTweet
Blood, bitterness and blackmail. Author Wendy Percival talks about her first novel, Blood-Tied, and completing her second, The Indelible Stain.
“I’ve always liked something with a bit of mystery and intrigue, where you’re wanting to know what the hidden thing is behind it all, with twists and turns.”
Mid-Devon based writer Wendy Percival is telling me about the kind of books she likes to read. Coincidentally, she is also describing her own debut novel. The story of a crime committed in the past and its repercussions on the present, Blood-Tied involves Esme Quentin, an ex-journalist turned historical researcher who uncovers the truth behind a brutal attack on her sister.
It’s a quest that leads her down the trail of a secret past, exposing unresolved bitterness, blackmail and dubious inheritance – ideal ingredients for a tale that holds you in its grip, with an ever-present sense of something sinister lurking in the background.
“They say you should write what you like to read, and that’s what I like to read,” says Wendy. “I have to have a book that really grabs me, where I want to find out what happens next.”
We won’t be giving anything away here, of course, but the novel’s labyrinthine plot was partly inspired by Wendy’s own interest in genealogy, as was her protagonist.
“I had an idea of having someone investigating through ways which I knew about, a genealogical Miss Marple type of thing.
“You read all sorts of anecdotes from people and it’s those things that start to feed in. And once you’ve got the necessary background, about how to go into records offices, what to look for and how to find things out, you can then set the character up in situations.”
Set in Shropshire, the novel has more twists and turns than a barrel full of snakes, due in part to Esme’s supersleuth speculations, which read like a series of plots-within-plots. How did such an engaging and courageous heroine evolve?
“I started off with questions about why she would be doing what she was doing. If she was a person who pushed the investigation and wanted to find things out, why would she supposedly be in a more historical, dry as dust profession herself?
“You create a character’s setting, and when you wind them up and set them off they tend to say or do things that are almost instinctive. And if it jars you think, ‘Ooh! I don’t think she’d do that!’ so you stop and change it.”
“To a certain extent it’s unconscious. You don’t say, ‘Oh I’ll have a bit of that and a bit of that’ because I tried to do that in the past when I was starting out and it didn’t gel. You need something to get the idea going, and from a core it develops and snowballs.”
The key to Esme’s current profession and why she left investigative journalism is part of the novel’s intrigue, as is the reason for her facial scar, an outward visible sign of a character who is flawed and vulnerable, yet headstrong and tenacious. Given that the two share an interest in family trees, I wonder what else Wendy and Esme have in common, and whether Esme is based on anyone in particular. 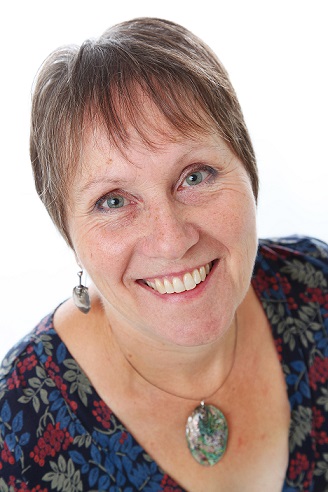 “She’s not based on anyone, really. There are bound to be elements of me I suppose, just because you go and visit an emotional situation and try to empathise with the character. You think, ‘How would I perceive that?’ or you instinctively feel it. There’s no way you can totally exclude yourself from a character if you’re going to delve further than the facade everybody else might see of someone.”

A life-long fan of crime fiction, Wendy cites Elizabeth George, PD James, Ruth Rendell and CJ Sansom as influences, with Frances Hodgson Burnett’s The Secret Garden as one of her all-time favourite books: “Obviously in the title you’ve got the subject of secrets, and then there’s the mystery of the sound of the person’s voice down the corridor. That’s deep down in me somewhere, I think.”

While reading has always been a part of her life, Wendy came to writing later on, pinpointing the exact moment – while shopping in Barnstaple, just before she gave up her teaching job, in 1997.
“I was in WH Smith’s one day and I saw a copy of Writing Magazine and thought ‘Ooh, that looks interesting!’ I picked it up and flicked thorough it and quite fancied the idea of being a writer. But then I thought, ‘Don’t be silly, that’s just fantasy land,’ and popped it back on the shelf, went off and did the rest of the shopping. But then I thought, ‘Why the hell not?’ and went back and bought the magazine. I was hooked and started to try short stories.”
A non-writing period followed while Wendy and her husband moved house. It was being short-listed for a couple of short story competitions, before winning Writing Magazine‘s Summer Ghost Story Competition in 2002, which made Wendy think, “Ooh! Perhaps I can write!”
I get the impression that for someone who hadn’t written before that time in Smith’s, she obviously didn’t just spend a lot of time thinking and talking about writing, like a lot of people do. She got on and did it.
“I suppose I did. But Writing Magazine is so good at telling you to do things. When people ask for advice, I say just get on and write. You can’t edit a blank page. It’s much better to get something down that you can work with than not to put your pen to paper because you’re terrified of what you’re going to write.
“You find you get to a point where you’ve written an awful lot of stuff that isn’t worth reading. But that’s your apprenticeship, you’ve got to make a start.”
Speaking of starts, Blood-Tied has turned out to be the beginning of a series of adventures for its heroine. After getting back into genealogy following yet another house renovation and move, Wendy was inspired to write a second Esme mystery. “So many people said how much they’d liked her,” she says. “It seemed inevitable that I’d write another at some point.”
It wasn’t long before potential storylines began buzzing around in Wendy’s head, particularly after reading articles about researching convict ancestry and the brutal penal history of nineteenth-century England. “The more background reading I did, the more fascinated I was by the subject and I decided that this dark period in British history had to be at the centre of Esme’s next investigation,” Wendy explains.
“I used much of what I discovered trawling through records in North Devon’s archives to bring legitimacy to the story, as well as what I read about the horrors the prisoners went through during the voyage overseas and on their arrival in the penal colony.
“I was thrilled when Family Tree magazine published an enthusiastic review of my novel, describing it as ‘fast-paced and enthralling, with well-drawn characters and a wonderful thread of authenticity’,” says Wendy.
Wendy is now working hard on her third Esme mystery, which this time centres on the clandestine world of WWII. She also writes a genealogy blog (www.familyhistorysecrets.blogspot.com), where she regularly reports on the real-life mysteries she’s uncovered while delving into her own family history.
Anyone wishing to lose themselves in an Esme mystery can buy them direct from wendypercival.co.uk (postage is free and it’s a secure payment system using PayPal).
Wendy’s books can also be found at Walter Henry’s Bookshop, Bideford; Hartland Quay Hotel; Hartland Abbey and Crediton Community Bookshop. They are also available to borrow in Devon libraries.
An edited version of this piece originally appeared in the North Devon Journal.